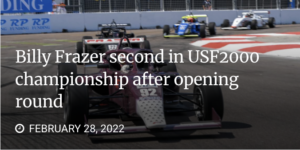 Billy Frazer leaves the first round of the 2022 USF2000 series second in the championship.

Frazer put together a strong run in the final race of the weekend finishing sixth, consistently moving forward after starting the race 12th.

Late in the race, Frazer put pressure on Thomas Nepveu to move into fifth place, though he was unable to complete the move remaining in sixth when the race ended.

Frazer finished second in the first race of the weekend, taking advantage of a clash between leaders Nepveu on the final lap.